Taverns Of The National Road

Read this in 8 minutes Skip To Map

At the height of the National Road, there averaged a tavern for every mile of the road to provide food, drink and lodging for monied people riding in stagecoaches and wagoners with Conestoga wagons.

At the height of the National Road, there averaged a tavern for every mile of the road to provide food, drink and lodging for monied people riding in stagecoaches and wagoners with Conestoga wagons.

After the federal government built the National Road, it was turned over to state governments to operate. Many of them paid for maintaining the road by establishing tolls. A pike blocked the road until the toll was paid. The pike was turned to allow a vehicle to pass, leading to them being called pike roads.

To draw large crowds of wagoners, pike tavern owners invented their own specialty drinks to offer something the other taverns didn’t have. As people rode stagecoaches or Conestoga wagons along the National Road west from Fayette County, the first set of taverns they encountered entering Washington County was in West Brownsville.

Adams’s Tavern was always crowded with guests during the heyday of the National Road.

Armstrong’s Tavern was filled at night during the peak of the road. Later it was used as a passenger and freight train station.

Owen’s Tavern was an old stone house operated by a veteran of the Revolutionary War. The owner’s father was murdered in the tavern, the crime was never solved and the tavern closed.

Centerville was halfway between Uniontown and Washington on the National Road. Today, the Centerville Historic District provides an example of a stagecoach stop – it was mostly used by people with the money to travel by stagecoach.

John Roger’s Tavern was a quiet, well-kept tavern. It became a private residence.

Zephania Riggle’s Tavern was the big wagon stand in the Centerville area. The wagon yard – where the Conestoga wagons were kept overnight – was located behind the brick building. It was owned by a succession of people who continued the tavern long after the peak usage of the National Road.

Not too far from Riggle’s Tavern was Constitution Tavern, which displayed a copy of the U.S. Constitution.

Miller’s Tavern didn’t last beyond the big years of the National Road. While it operated, it was a popular, well-kept overnight place.

Railley’s Tavern was a brick house that conducted business for about twenty years during the peak of the National Road traffic. Later, it became someone’s home.

The Beallsville Historic District is what remains of a former pike town – over 100 buildings, most of them contributing, an old cemetery and a milestone marker.

Key’s Tavern was the first tavern seen on entering Beallsville from the east. It had a large wagon yard. During the money-making years, there was a new proprietor every few years.

The Charlie Miller House was an “aristocratic old tavern … [that] enjoyed a good reputation as an eating house,” according to Searight’s The Old Pike, published in 1894 and quoted in Route40.net.

Greenfield Tavern was known for its coffee, which taverns didn’t usually serve, and the Beallsville Savings Bank, which was located in the tavern.

The Scenery Hill Historic District showcases taverns from the heyday of the National Road. Related service facilities and retail stores can be seen.

People made the trip from Washington to Scenery Hill for dinner and dancing at Miller-Taylor Tavern. The popular destination served sumptuous, savory meals, according to The Old Pike. The building became a private residence.

Hill’s Tavern opened before the National Road and continues in business today as Century Inn. Many well-known historic figures have stayed there.

Ringland Tavern, also known as Beck’s Tavern, was a stagecoach stop that also did a general business.

Riggle-Clark House was popular in its day. It was owned and operated by one person the entire time it was a tavern.

Wilson’s Tavern was a lively establishment located in the center of Hillsboro – which is what Scenery Hill was known as.

Plymire-Yorty Tavern was also known for its entertainment. The tavern’s owner was an attentive host.

Ward’s Tavern was a farm-to-table establishment – the same rich man owned the large frame house tavern with a large front porch, big wagon yard and farm. It was a popular stop and became a local landmark.

Martin Tavern opened in or near Laboratory in 1825.

Moses Little Tavern has been designated an historic building by the Washington County History & Landmarks Foundation (WCHLF). It was remodeled in 2018 and became an events venue.

Pancake Tavern was operated by George Pancake on East Maiden Street in the early 1800s. Laboratory was also known in those years as Pancake.

Mount Vernon House opened before the National Road was completed to Washington. It was also known as Dunlap’s Tavern after its first owner, who was involved in the Washington County militia, which was important when the area was the American frontier.

The National Road brought wealth to Washington in the form of dozens of taverns that provided food, drink and lodging to people traveling the National Road. Here are a few of them.

Hastings’s Tavern was a “leading tavern of the [National] Road” for common wagoners, according to The Old Pike. The well-kept establishment remained popular through the popularity of the road in the 1800s.

The Upland House, near Hastings’s Tavern, felt aristocratic. People riding in stagecoaches and carriages ate, drank and spent the night at the Upland House.

The Globe Inn was an unimposing stop along the National Road. It was known for the visit of the Marquis de Lafayette in 1825, when Lafayette was a celebrity for his role in helping the colonies win the Revolutionary War.

The White Goose was built years before the National Road opened. It became a pike tavern. It passed through a long succession of owners and went under various names. By the 1840s it became quite the popular wagon stop. It was rebuilt in 1846.

The Doak-Little House was a farmhouse and tavern in South Strabane Township. It has been designated as a historic landmark/farmstead by the WCHLF, and listed with the National Park Service’s National Register of Historic Places.

After departing Washington, travelers could stop at Claysville or West Alexander before continuing into West Virginia and stopping at Wheeling.

The Levi Wilson Tavern, not too far from the historic S Bridge, is designated as a historic landmark by the WCHLF. It was built in 1816.

Caldwell Tavern opened as early as 1819. A separate door provided the entrance to the barroom. Food was prepared out back. There was a double decker rear porch. It burned in 1840 and was rebuilt.

The first tavern that opened in West Alexander was the American Eagle Tavern on Main Street. It opened prior to the National Road being built west of Washington and remained open for years.

Many of the taverns that prospered along the National Road didn’t survive the decline of road traffic after the railroads grew in popularity in the second half of the 1800s. Today, about thirty of them remain. Some are private residences.

As people have rediscovered charming old roads, the National Road has become home to a new wave of eating and drinking establishments.

Locations of select former taverns along the National Road

This article was published in February 2022

The National Road in Washington County 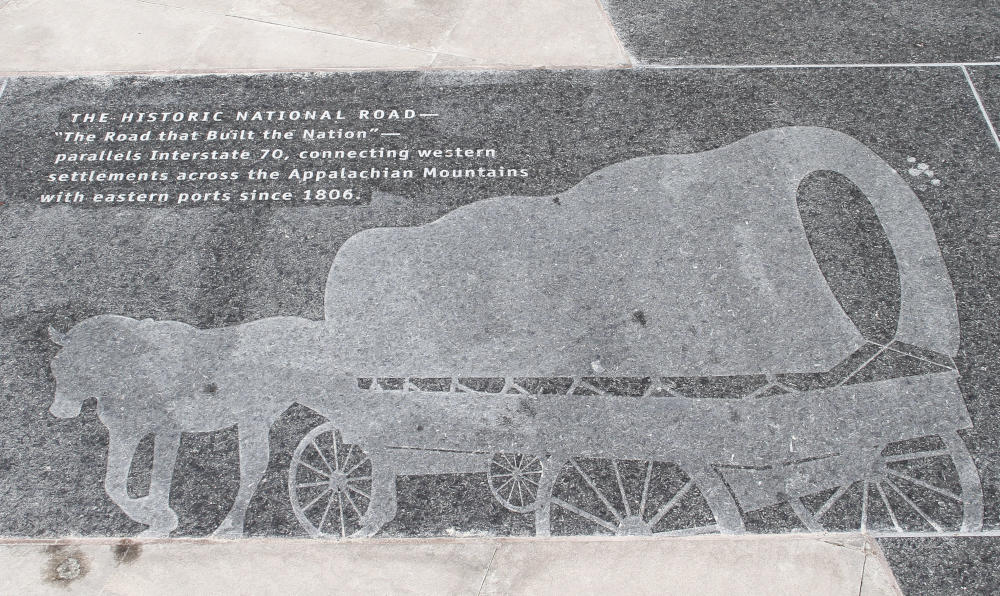 The National Road was the "The Road That Built The Nation". It is still used today… continue reading

10 Historic Districts To See This Year 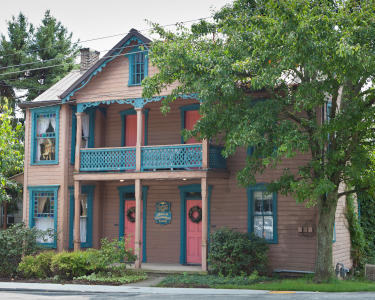