Read this in 5 minutes Skip To Map

Turning grain into whiskey at small-scale distilleries was once important to the economy of Washington County and the rest of the state. Distilling happened throughout the area, including at the Huffman Distillery and Chopping Mill in Somerset Township.

In the late 1700s, many farmers in the area were distillers. It was simple enough to chop down a few trees, have barrels made and install a still. The resulting alcohol could be easily transported to market. Almost everyone drank whiskey then.

Turning grain into whiskey at small-scale distilleries was once important to the economy of Washington County and the rest of the state. Distilling happened throughout the area, including at the Huffman Distillery and Chopping Mill in Somerset Township.

There were no consistent techniques at that time for producing whiskey.

its quality had to have been questionable.

Distilling is dangerous – stills can explode. The reason for making whiskey was that the other, less dangerous choice – letting part of the grain harvest rot in years when the crops were good – was a poor choice for farmers.

During the Revolutionary Way, General George Washington suggested that distilleries be constructed throughout the newly independent 13 states. Soldiers were given whiskey to get through the winters.

The benefits arising from the moderate use of strong liquor have been experienced in all armies and are not to be disputed.

A still house or distillery was the first structure built by Rudolph Huffman on what became the historic Huffman Distillery and Chopping Mill complex. It was constructed in 1790. The foundation is sandstone. It was built of logs and stone. At 27-foot by 29-foot, it is nearly square. The exterior was stucco but little of that remains.

The distillery is a banked structure – both floors have an outside entrance that opens at ground level. Banked buildings are often built on hills. Barrels of whiskey were apparently stored on the first floor of the distillery, with distilling happening on the second floor. Wood-fired copper stills were commonly used.

The Whiskey Rebellion (1791-94) erupted shortly after the Huffman Distillery was built. Local distillers objected to the Whiskey Tax, which the new federal government enacted to pay debts the states ran up during the war. Small distillers in Washington County couldn’t get the volume discounts on the tax that the large distillers in eastern PA could. They didn’t pay the tax. They threatened the tax collectors. There was violence until President Washington led an army to squash the rebellion. The history of the rebellion can be seen at the Whiskey Rebellion Education And Visitor Center in downtown Washington.

Somerset Township had “the highest number of stillers in Washington County” in 1796-97, according to documents submitted to nominate the complex as a national historic place.

After the Whiskey Rebellion simmered down, Huffman’s heirs built the chopping mill southeast of the Huffman Distillery. It looks like a small barn. Grain was brought to the square wooden building to be milled into mash, a crucial ingredient in making whiskey. Horses, brought in through double doors and up a ramp, walked a treadmill for hours to grind the grain.

In 1810, about twenty years after the distillery was built, a 2½ story, four-bay main house was constructed of brick northeast of the distillery. The front door opened into a large square hall with a partly enclosed stairway leading up to bedrooms. There was an ell-shaped kitchen in the rear, interior chimneys to vent heating and cooking fires, and a front porch.

The same year, a combined smokehouse and springhouse was built on the property. It’s two stories. Some exterior stucco remains.

A few years later, a bank barn was added to the growing complex – like the still house, a barn has ground-level entrances on two different levels.

Distillers were usually part of the elite of their communities. The Huffman family became prominent in the area. Four generations of Huffmans owned the complex until 1894. Over the years, a dozen buildings and other structures were erected, including a summer kitchen and wash house, and a chicken house.

In the late 1800s or early 1900s, the chopping mill was converted into stables for cows, a room was added to milk cows and another addition may have been used to process the milk. The ramp to bring in horses for the treadmill was removed but the double doors remain.

In the mid to late 1900s, a metal silo was erected, a garage built and a wagon shed constructed.

The Washington County History & Landmarks Foundation designated the Huffman Distillery and Chopping Mill a historic landmark. The distillery, chopping mill, smokehouse/springhouse, main house and barn are listed together on the National Register of Historic Places. The chopping mill is the only one known to still exist in the region.

Not many places like the 180-acre Huffman Distillery and Chopping Mill complex remain as a reminder of what distilling was like when it was important in the area.

This article was published in May 2022 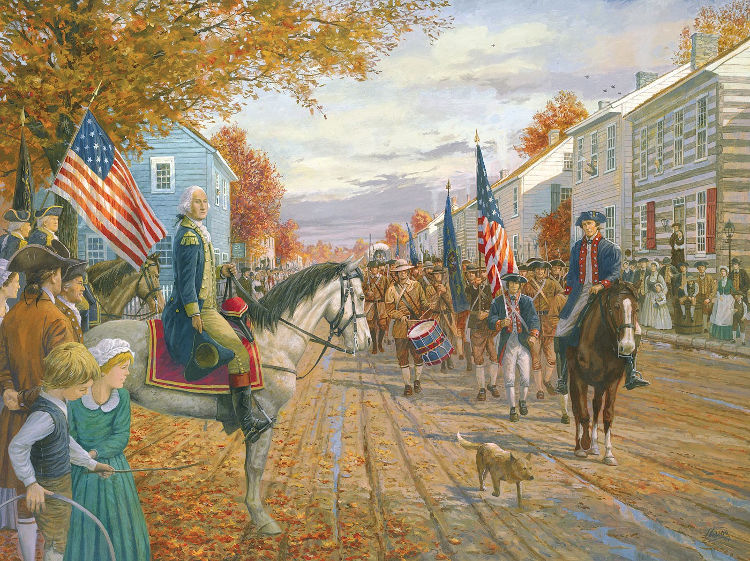